Zhou Jin, after 80 girls, had several well-known cosmetics brand agent, is now the first brand of China underwear healthy love Lingerie underwear agents, recalls the secret of their success, she mentioned the most is the "insist" two word. 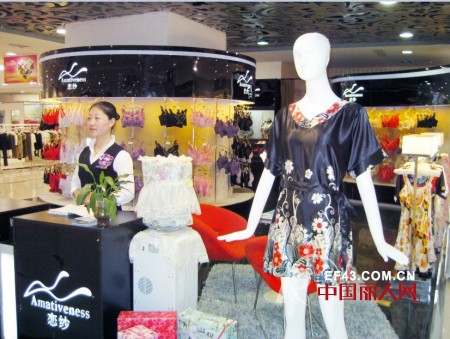 In 2008, 23-year-old Zhou Jin graduated from university successfully hired a company to do a white-collar workers, a good working environment, and stable income, but she did not meet the monotonous life of nine to five, and without consultation with their parents, Resigned, working with saved money, looking for friends borrowed 20,000 yuan, opened a cosmetics store, embarked on the road to their own businesses, despite her spent three years painstakingly run his own shop, but she Business has always been no big improvement, which made her very disappointed and restless, began to ponder the switch things. After some market research, Zhou Jin found that China's underwear market is growing at an annual rate of 30%, especially the healthy bra market is very large, and identify underwear industry is definitely a sunrise industry, optimistic about the future. March 2011, after some inspection, Zhou Jinyi chose to take the time to become a rising star in China's underwear industry. The first brand of Chinese healthy underwear - Love yarn baby health conditioning underwear, continue her beautiful career.

On why choose a new brand, will not be very risky this issue, Zhou Jin told reporters, Love yarn such a new brand franchise fee low, and the purchase price concessions, product variety, update soon, the quality will not lose To the international big names, women consumers are now very sensible, they only choose the right, do not choose expensive, coupled with love yarn underwear is designed for Chinese women, environmental quality fabrics, scientific and rational design, style elegant fashion, especially Love yarn baby magic ring bra has been in the hot state since the market, the profit is impressive, I opened the store sales on the million, is unexpected! At the end of a plan, even earned 200,000, this is my first Amoy to Amoy gold.

When it comes to joining Love yarn baby underwear, Zhou Jin can not conceal his inner joy. She introduced that in 2009, Love yarn Baby established in Hong Kong, January 2010 landing in Shenzhen, China, in joining the franchisee, there are a lot of powerful competitors, but in the end the ultimate love yarn chose her, love yarn fancy Is her years of experience, career dedication and brand familiarity and ability to operate.
Talking about the ability to operate the brand, Zhou Jin is very sad, she said it was another blow she suffered, let her become mature. It was the first time she opened the shop in 2009, she was acting for a certain brand of cosmetics, she devoted all the wisdom and effort, 2 years, 720 days, she had 400 days in the train is not in the car, she For the brand to open more than 20 stores, sales rise steadily, but the contract is full, that cosmetics manufacturers to recover the agency, do not want to renew her contract, she was very sad and disappointed, seeing their own efforts to pay the East flow.

May be innate irrespective of the character, so she did not take long to invest in a new round of entrepreneurship, she joined the love yarn Baby Series underwear. Zhou Jin also revealed to reporters, even the best quality products also need people to operate, to open up the market. I think Love yarn Baby magic ring bra is very much in line with the modern women's pursuit of freedom, fashion, environmental protection, health philosophy, both to create a perfect curve, but also with health care functions, the future, green bra inevitably popular, I believe I will soon put a new Brand to do it, for an early become an annual income of more than 500,000 manager.